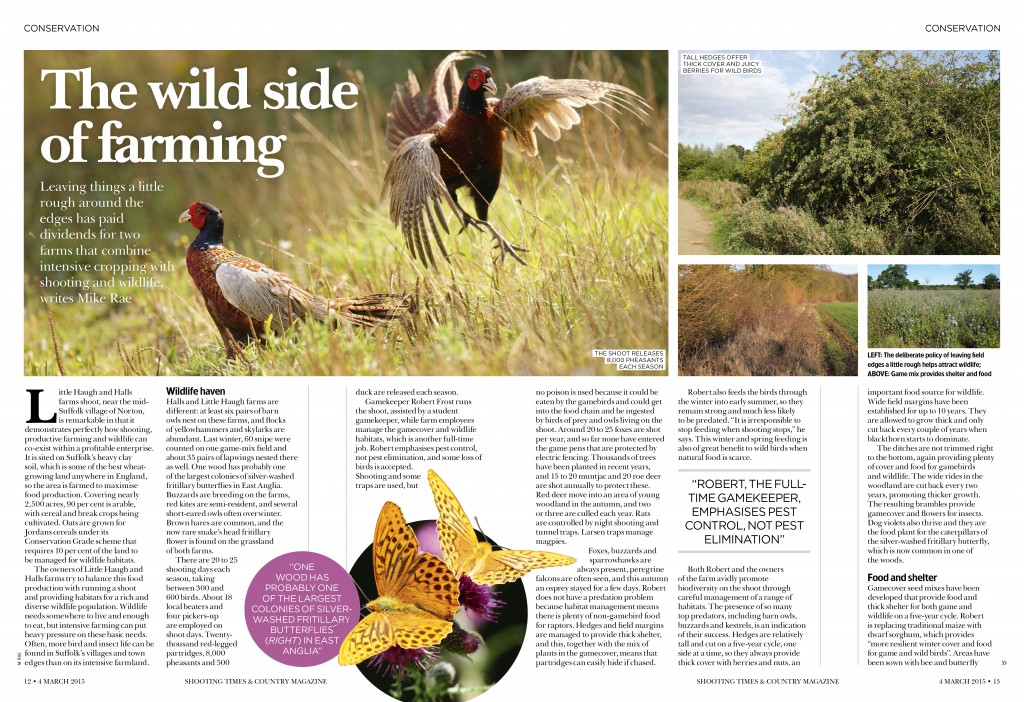 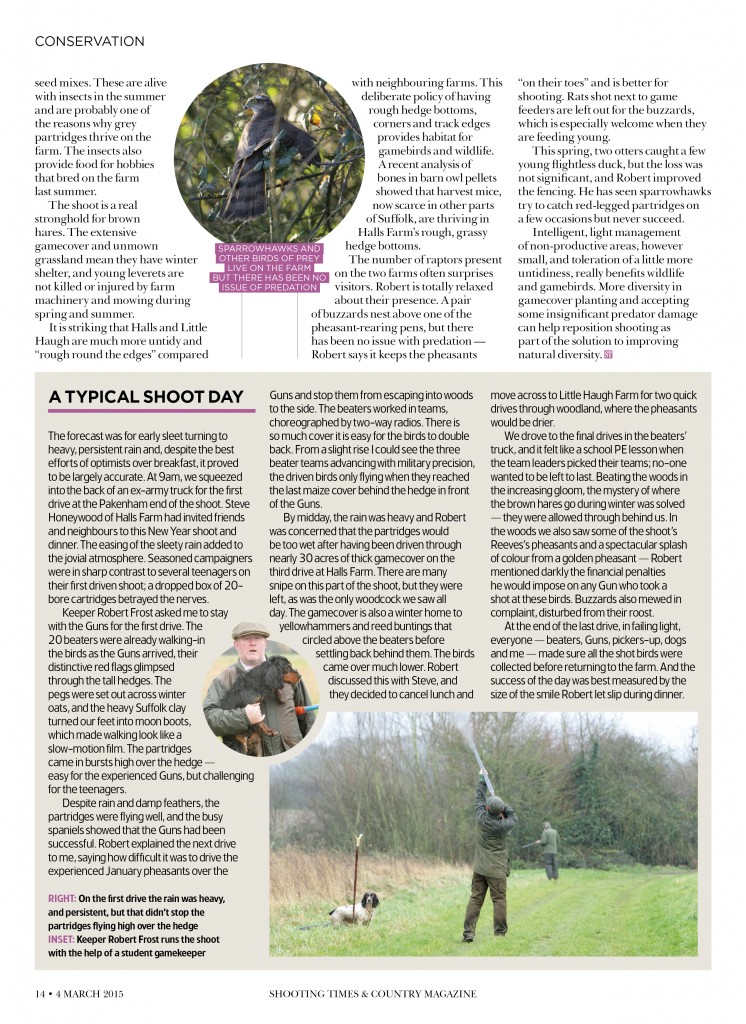 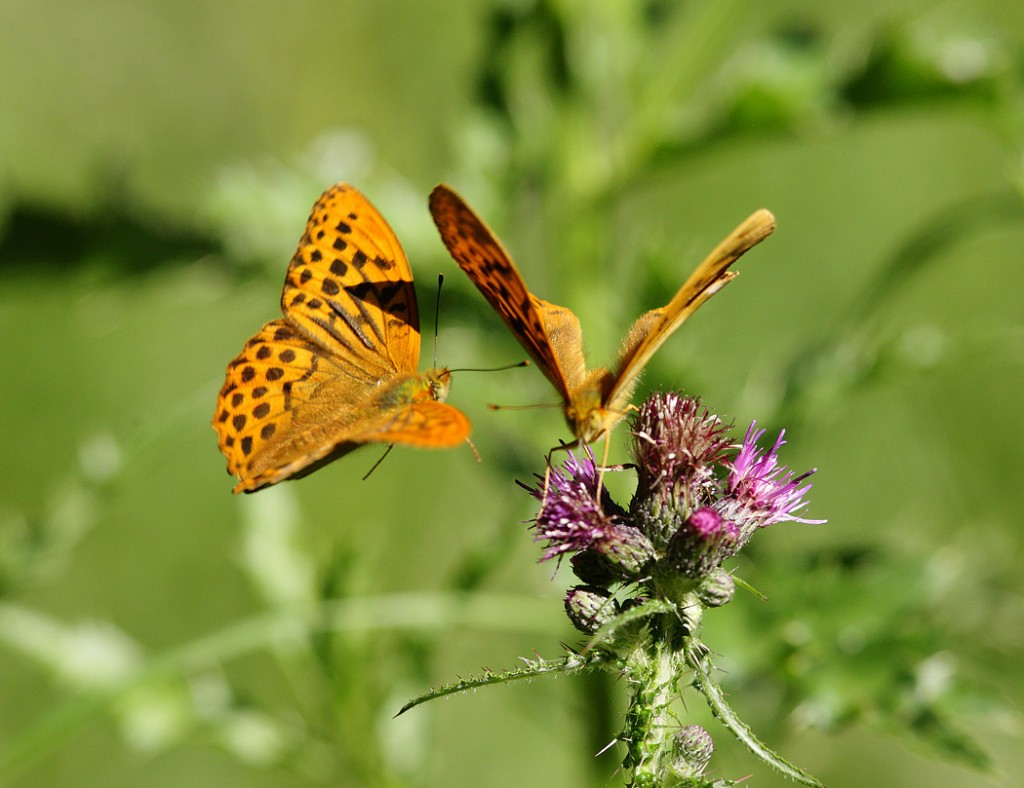 Little Haugh and Halls farms shoot is near the Mid Suffolk village of Norton and covers nearly 2500 acres. 90% of the land is arable, growing cereal and break crops. Oats are grown for Jordan’s cereals under their Conservation Grade scheme that requires 10% of the land to be managed for wildlife habitats. Gamekeeper Robert Frost runs the shoot assisted by a student gamekeeper. Managing the game cover and wildlife habitats is another full time job covered by farm employees.

The shoot is on Suffolk’s heavy clay soils; some of the best wheat growing land anywhere in England. The area is intensively farmed to maximise food production. The owners of Little Haugh and Halls farms try to balance food production, running a successful shoot, and providing habitats for a rich and diverse wildlife population.

Wildlife needs somewhere to live and enough to eat; intensive farming puts heavy pressure on these basic needs. Often, more bird and insect life is found in Suffolk’s villages and town edges than on intensive farmland. Halls and Little Haugh farms are different; at least 6 pairs of Barn Owls nest on these farms and flocks of Yellowhammers and Skylarks are abundant. Last winter 60 Snipe were counted on one game-mix field and about 35 pairs of Lapwings nested there as well. One of the woods has probably the one of the largest colonies of Silver-washed Fritillary butterflies in East Anglia. Buzzards are breeding on the farms, Red Kites are semi-resident and several Short-eared Owls often overwinter. Brown Hares are common. The once common Snakes Head Fritillary flower is found on the grassland of both farms.

Robert, the full time gamekeeper, emphasises pest control, not pest elimination and some loss of birds is accepted. Shooting and some trapping are used but Robert will not use poison because it could be eaten by the game birds and, more importantly, it could get into the food chain and be ingested by birds of prey and owls living on the shoot. Around 20 – 25 foxes are shot per year, and so far none have entered the game pens that are also protected by electric fencing. Thousands of trees have been planted in recent years and 15 – 20 Muntjac and 20 Roe Deer are shot each year to protect these. Red Deer move into an area of young woodland in the autumn and 2 or 3 are shot each year. Rats are controlled by night shooting and tunnel traps. Larsen traps manage magpies.

Buzzards, sparrowhawks and foxes are always present, peregrine falcons are often seen, and this autumn an osprey stayed for a few days. Robert does not have a predation problem because of the habitat management and because there is plenty of non-game bird food for raptors. Hedges and field margins are managed to provide thick shelter and this, together with the mix of plants in the game cover, means that partridges can easily hide if chased. Robert also continues to feed the birds through the winter into early summer so they remain strong and much less likely to be predated; he says “it is irresponsible to stop feeding when shooting stops”. This winter and spring feeding is also of great benefit to wild birds when natural food is scarce.

Both Robert and the owners of the farm avidly promote biodiversity on the shoot through careful management of a range of habitats. The presence of so many top predators including barn owls, buzzards and kestrels is an indication of their success.

Hedges are relatively tall and are cut on a five-year cycle, one side at a time so that they always provide thick cover with berries and nuts, which are an important food source for wildlife.

Wide field margins have been established for up to 10 years. They are allowed to grow thick and only cut back every couple of years when blackthorn starts to dominate.

The ditches are not trimmed right to the bottom, again providing plenty of cover and food for game birds and wildlife.

The wide rides in the woodland are cut back every 2 years, promoting thicker growth. The resulting brambles provide game cover and flowers for insects. Dog violets also thrive on this management and they are the food plant for the caterpillars of the Silver-washed Fritillary butterfly which is now common in one of the woods.

Game cover seed mixes have been developed that provide food and thick shelter for both game and wildlife on a five-year cycle. Robert is replacing traditional maize with dwarf sorghum, which he says provides “more resilient winter cover and food for game and wild birds”.

Areas have been sown with bee and butterfly seed mixes. These are alive with insects in the summer and are probably one of the reasons why grey partridges are thriving on the farm. The insects also provide food for Hobbies that bred on the farm last summer.

The shoot is a real stronghold for Brown Hares. The extensive game cover and un-mown grassland means they have winter shelter and young leverets are not killed or injured by farm machinery and mowing during spring and summer.

It is striking that Halls and Little Haugh are much more untidy and “rough round the edges” when compared to neighbouring farms. This deliberate management policy of having rough hedge bottoms, corners and track edges provides significant habitat for game birds and wildlife. A recent analysis of bones in Barn Owl pellets shows that Harvest Mice, now scarce in other parts of Suffolk, are thriving in Halls Farm’s rough grassy hedge bottoms.

The number of raptors present on the two farms often surprises visitors. Robert is totally relaxed about their presence. A pair of buzzards nests above one of the pheasant rearing pens but there has been no issue with predation, Robert says it keeps the pheasants “on their toes” and better for shooting. Rats shot next to game feeders are left out for the buzzards, especially welcome when they are feeding young. This spring, two otters caught a few young flightless ducks, but the loss was not significant and Robert improved the fencing. Taking action against the otters was not considered. I have seen sparrowhawks try to catch red-legged partridges on a few occasions but never succeed. Foxes and muntjac deer are often seen on the farms. They are managed by shooting and the objective is to minimise the damage they do, not total elimination.

Halls and Little Haugh farms demonstrate how intensive farming, shooting and wildlife can co-exist on a profitable enterprise. Intelligent, light management of non-productive areas, however small, and toleration of a little more untidiness really benefits wildlife and game birds. More diversity in planting of game cover and an accepting attitude to some insignificant predator damage can help reposition shooting as part of the solution to improving natural diversity.